Pragatima is a tall Hazan woman, with dark skin and striking features. She has the powerful looking body of a martial artist, clad in the traditional colors of her clan. She mostly eshews the leopard-skin cape that is the sign of the rhino-riders, prefering to wear a practical light armor that leaves her free to fight and move.

Pragatima rides a massive rhinoceros called Gendo, who usually carries the lances and spears she uses to fight.

A minor chief from the Kariba tribe, Pragatima leads a small group of female warriors called the Voriyaras. They sell their spears all around the plains and the coastline. Known for their unbreakable word and for their skill at riding and fighting, they are often used as guards and sometimes as shock troops by rich clients.

A master of White Reaper style and a student of the Nightingale and Snake styles, Pragatima focuses on her esoteric paths to dominate group fights and protect her troups in large fights. She is the wielder of Piercing Thunder, a blue Jade and Orichalcum Direlance. 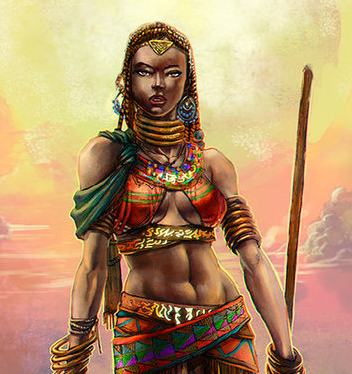