Dir-Jal, also called the City of the Chained God, sits at the bottom of the valley of Jalist, next to the sluggish river Dast. A few centuries ago, the river was known for its clear green waters, but the blood flowing from the beast day and night has given it a pinkish-brown hue and a strong and acrid smell that spreads down the valley all the way down to the Sea of Gold. 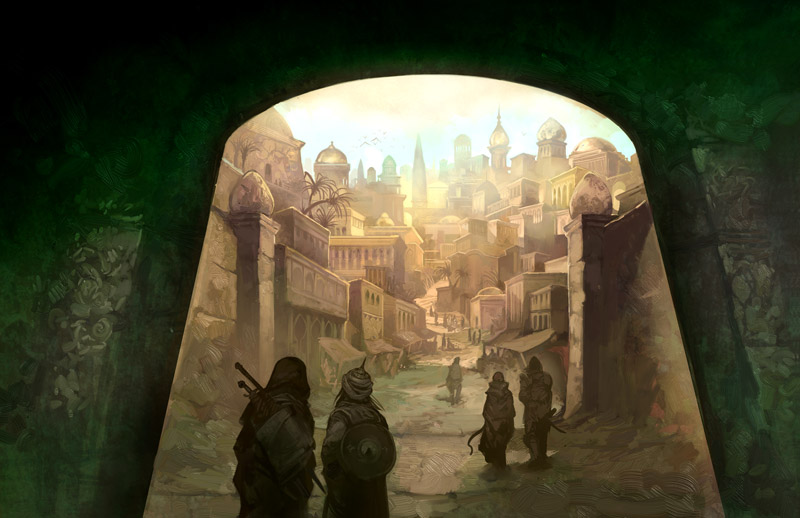 The city itself started as a mish-mash of wood huts, part base camp, part trading outpost, as savants, alchemists and thaumaturges came to study and exploit the still living carcass of the Inashi. Over time, it was discovered that the beast kept regenerating, albeit at a slow pace, and the great monster was exploited as a source of reagents and materials. Many alchemical wonders are created out of the enormous body, and as more and more of those were discovered, the city grew and became prosperous, attracting people from all over the area, eager to profit from the riches plundered from the very body of their old enemy.

And so Dir-Jal lives, its towers and keeps and walls spreading around the massive body of the Inashi that still sometimes trashes in its unbreakable chains. Because of the occasional earthquakes brought about by this, there are precious few towers in Dir-Jal, and the chained Inashi is visible for miles around. The stench of the monster laid open to the sky is overwhelming, and outsiders not born in the city never really get completely used to it. Every day, butchers-savants hack parts of the monster, collecting blood, bones, leather or more specific parts to use and sell. A whole economy has sprung around the harvesting and study of the Inashi’s ever-renewing remains.

The social organization of the city is centered on the immortal beast. Thaumaturges are obviously a power unto themselves, but the Guild also has a great influence on the city, importing luxury items, steel and mostly food, the area being insufficiently fertile to sustain a city the size of Dir-Jal. A council with members from those two groups rules the city.

Thousands of workers work to load and unload the great caravans, living in great communal barracks and looking for work on a day-to-day basis in the three caravanserai of the city. The army of Dir-Jal is powerful, equipped with unbreakable bone spears and clad in armor made from the leather of the great beast.

And under the banners of the city, displaying the chained monster under a tower, a forbidden cult is beginning to gain traction, worshiping what they started to name the Chained God. Their priests preach in the street that the Inashi is meant to roam and destroy, to give way for new things in the world, and that the rising decadence and brutality of the city is proof that the natural order has been overthrown. Of course, most of those demonstrations are quickly stopped with extreme prejudice, but the cult is growing nonetheless, and social unrest is growing with it.