The Hazan are a proud people, and they have earned that pride. Hundreds of years ago, they lived and hunted from the shores of the Dreaming Sea to the depth of the Earti Plains, riding horses and keeping on the move, leaving the sea to venture deep inland when the Inashi rose up from the sea.

Today, they are hunters, herders and warrior-nomads still, pushing their flocks on the plains and waging wars against the city-states of the coast or occasionally against each other. The twenty two clans are divided along family lines, and rarely come together except for festivals and during great wars. Each clan has its own traditions and customs, but they all worship the one they call Bara-bara, the Great Rider, and the Copse Mother. 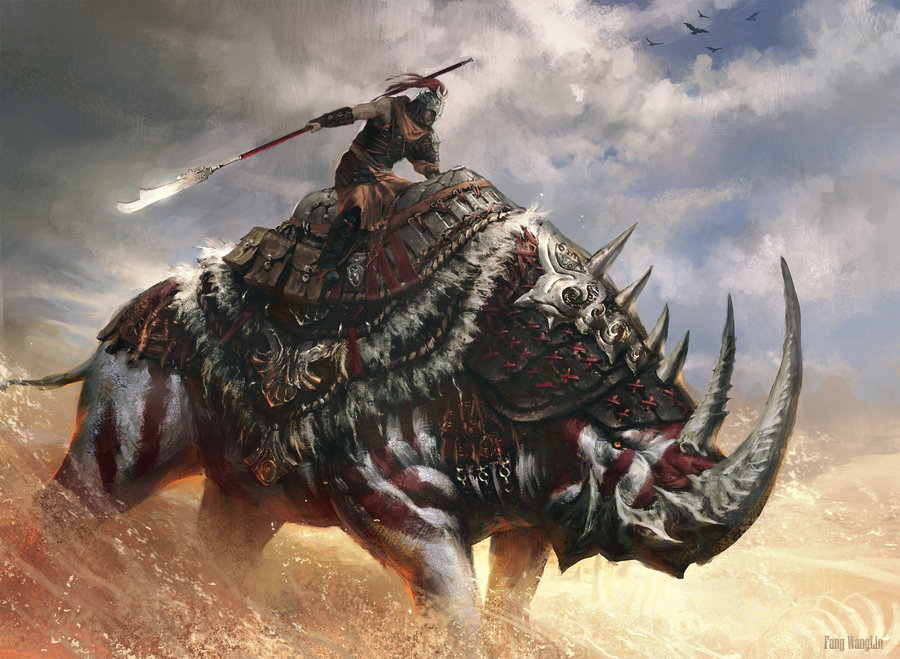 The Hazan put great stock in riding, hunting and animal husbandry, and often say that being a great hunter is better than being a great warrior. This does not mean that they are shy when it comes to battle, however, and some clans are often hired as mercenary in the region. Chiefs, clan-leaders and professional warriors often ride domesticated rhinos that they paint in the color of their families before going into battle. The sight of a full wing of rhino riders charging is often enough to break the lines of even a disciplined army, and the Hazan mercenaries have earned a fearsome reputation because of this.

Hazan trade between themselves in elaborate ceremonies called Apana. They are also known for their elaborate weaving techniques, each tribe and clan decorating their animals and tents with elaborately decorated fabric, and Hazan tapestries are in demand everywhere in the area.

In the center of the plains, far away from the coasts, lies Hazan-lo, the hidden city of the Hazan nomads. It is there that the clans meet during festivals and between their travels. The location of the city is a secret to anyone not of the Hazan, and kept that way by the peculiar walls that surround it. The walls are made out of a single, living banyan tree, spreading thousand of roots and trunks to surround the city, making it appears like a small but impenetrable forest. Inside the walls, the city is built around a series of round plazas, the biggest one more than a mile in diameter, where the Hazan keep their animals and spar.

While out in the plains, the Hazan worship the Great Rider Bara-bara, making offering of burned meat and spilling blood in his name. Inside Hazan-lo, they give homage to Mother Copse, she who shelters them with her trees and offers them the bounty of the land. Occasionally, a child of the tribe is born with blood-red or stone-grey skin, contrasting with the usual chestnut complexion of the Hazan. They are called barakin, and are said to be able to intercede with the gods and the spirits of the plains in the Hazan’s favor. Many become priests and soothsayers for their clans, though there are a lot more priests than barakin at any given time.

Hazans avoid the shadowlands that dot the plains of the area, fearing the ghosts of those that were slain by the Inashi. Meetings between wanderers in the plains are often sanctified by a ritual exchange of salt.